I love using this beadweaving stitch to make beaded ropes and straps for my bead-embroidered cabochon pendants, and lately I’ve been experimenting with adding a little bit of texture and color to my beaded herringbone ropes. Jazzing up your next tubular twisted herringbone rope is easier than you might think, and …

How Do You Like Your Herringbone? – Daily Blogs – Beading Daily

When it comes to versatility in bead-weaving stitches, you can’t beat herringbone stitch. I can’t think of another beading stitch that offers so much variation! The thread path of herringbone stitch (also called Ndebele stitch because of its origins in the beadwork of the South African Ndebele tribe) makes for both soft and supple beaded ropes as well as a strong and sturdy base for flat beaded necklaces and bracelets… 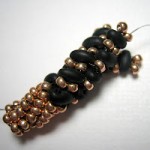 Not a fan of the newest two hole bead, the Twin Bead, I haven’t seen many patterns using it that have wow’d me. This one for using twin beads in a twisted herringbone. I have been quite suspicious of any bead with two holes, it just doesn’t seem NATURAL.

Because I had used such a wide range of seed bead sizes in the same row of herringbone stitch, my curves were more dramatic and appeared much faster than if I had used seed beads that were closer in size. The final result, however, was my Ode On A Grecian … And because of the way the rows are aligned one on top of the other, you can use patterns meant for square stitch when working in flat herringbone stitch. Just remember that the slight angle of the beads …

One of my favorite herringbone patterns is Virginia Jensen’s Spinner Rims from the October 2009 issue of Bead and Button. Herringbone and I had a more platonic relationship, until I began experimenting with different sized beads and realized how versatile and surprising this stitch can be.

How to Do Herringbone Stitch

In this Beadaholique video, Andrea shows us How to Do Herringbone Stitch.

Join me as I demonstrate the Cubed Herringbone Stitch. Ladder-stitched cube bead rows work as a foundation to this bracelet. The stitch is easy to learn and the tapestry like look will …

How to Bead Weave a Triangle Using Peyote and Herringbone Stitches

In this Beadaholique video, Andrea shows us how to bead weave a triangle using peyote and herringbone stitches.

Get our blog updates delivered for free to your reader, your email or via Twitter: